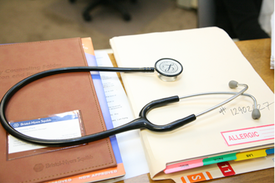 Neuroendocrine tumors (also known as endocrine or islet cell tumors) account for less than 5% of pancreatic cancers. Islet cells are endocrine cells in the pancreas that produce and secrete insulin, glucagon and somatostatin into the blood stream to regulate blood sugar levels and other hormones in the blood. Neuroendocrine tumors may be benign or malignant and tend to grow slower than exocrine tumors.

Pancreatic cancer is the fourth deadliest type of cancer. Despite new drug treatments, survival rates for pancreatic cancer remain the same as they were 40 years ago. According to the Pancreatic Cancer Action Network, 94% of patients die within five years of diagnosis.

At time of diagnosis, each patient is staged so that doctors and patients can compare cancer at different stages of advancement. Patients at each stage have a prognosis dependent on the kind of treatment offered at that stage.

Stage I – The tumor is confined to the pancreas and a surgeon feels all of the obvious disease can be removed. Almost all of these patients also receive post-operative therapy because there is a high statistical probability of spreading, even if only microscopically.

Stage III – The tumor has moved beyond the pancreas to involve lymph nodes.

​Stage IV – The primary tumor varies in size. The disease has spread to other organs or another part of the body such as the liver, abdominal wall, lungs, or distant lymph nodes. 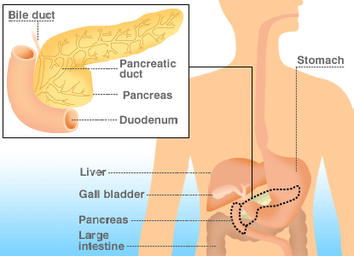 Treatment for Patients after Curative Surgery (Stage 1)
In the post-operative adjuvant setting, the Gastrointestinal Tumor Study Group reported that patients who receive combined radiation and chemotherapy following curative resection had a median survival rate of 21.0 months compared to a median survival of 10.9 months in the control group who received surgery alone. Accrual to this trial began in 1974. Final results were reported in 1985.

The CONKO-001 trial was a large phase III trial to evaluate the benefits of gemcitabine for patients with resected pancreatic cancer. Three hundred sixty-eight patients were randomly assigned to gemcitabine versus observation. In the final analysis there was no difference in overall survival between the gemcitabine group and the control (observation) group. The overall median survival was 22.1 months and 20.2 months respectively for gemcitabine and observation.

Comments on adjuvant therapy by Dr. Isacoff:
Following surgery, both local and systemic relapse rates are high, however local recurrence is a rare cause of death. Most patients die of systemic complications of the disease. If one carefully analyzes all of the published data since 1985 regarding the use of adjuvant treatment in resected patients, it is easy to conclude that there has been no significant advances in overall outcome and survival. Why?

In more than 80% of patients who undergo curative surgery, there is microscopic disease outside the field of surgery or radiation. This significantly impacts survival. Short courses of single agent therapy have thus far proven to be ineffective. Radiation has no chance of treating disseminated disease and is therefore an irrational approach. Radiation in this setting only compromises the ability of patients to tolerate combination chemotherapy; thus far trials for the treatment of patients after curative resection have been poorly designed. For more than 10 years we have debated the use of a chemotherapy only approach but none have been implemented thus far. Single agent chemotherapy has little impact on eradicating systemic micro metastases. Yet combination chemotherapy has not been adequately evaluated because of fears of unacceptable toxicity when utilized with radiation. We need trials of chemotherapy only (no radiation), and that which is employed should have a response rate of greater than 40% when treating advanced metastatic disease.

Treatment for patients with metastatic disease (Stage 4)
Since its approval 13 years ago, gemcitabine has been considered the standard treatment for metastatic disease, based on the improvement in clinical benefit response, when compared to 5FU. In the Burris trial (the pivotal trial upon which the FDA approved gemcitabine) there were no confirmed objective tumor responses with either treatment. The Burris trial has never itself been confirmed and has been criticized because of its flawed design. The number of patients who were randomized and subsequently treated was only 126. Of the 63 patients treated with 5FU, only 28 were eligible to be evaluated for clinical benefit response, the primary end point of the study. In the control arm, the 5FU was administered as a bolus infusion. This has been shown to be a sub-optimal method of administration, and may have not been a valid control against which to evaluate gemcitabine. At the doses of 5FU utilized when given as a 30 minute infusion, it would unlikely achieve therapeutic blood levels. The one-year survival rate for 5FU was unusually low. Other 5FU containing trials have reported survival rates of 6 and 7.6 months. It is possible, that had 5FU been given in a more active form, the comparative benefit attributed to gemcitabine would not have been significant. Stoniolo et al., in an open labeled single-arm design with 2380 patients with locally advanced or metastatic pancreatic cancer treated with gemcitabine, reported a median survival to be only 4.8 months. There is little or no conclusive evidence to show that gemcitabine is superior to 5FU as first line therapy for pancreatic cancer. At this time, no standard single agent can be recommended as first line therapy. Gemcitabine has not improved the median survival, when compared to what preceded it, for patients with stage I, II, III or IV disease. Its continued use prevents the design of more effective trials.

In May 2011, Conroy et al. reported the  results of their randomized  trial where 342 patients received either FOLFIRINOX every 2 weeks, or gemcitabine weekly for 7 of 8 weeks and then weekly for 3 of 4 weeks. The median survival was 11.1 months in the FOLFIRINOX group compared with 6.8 months in the gemcitabine group. At 6 months, 31% of the patients in the FOLFIRINOX group had degradation of their quality of life versus 66% in the gemcitabine group. This is a major step forward for patients with pancreatic cancer and must be considered the new standard of care for both clinical practice and for developmental therapeutics in the area of pancreatic cancer clinical research.

As reported in the December 2011 issue of JCO, Von Hoff et al. combined gemcitabine with nab-paclitaxel as first line therapy for patients with metastatic pancreatic cancer as part of a phase I/II trial. Sixty-seven patients were treated. Eighty-seven percent of all patients were alive for 12 months or more. A phase III trial is ongoing comparing the combination to gemcitabine alone.

Comments on treatment for stage 4 disease by Dr. Isacoff:
Single agent chemotherapy alone is not the answer. Only effective combination chemotherapy will lead to improved survival. However, no combination has thus far been developed with any scientific rationale. FOLFORINOX is the combination of FOLFOX and FOLFIRI. This was first used for the treatment of colon cancer as reported in JCO by Falcone et al. in 2002. The trial utilizing nab-paclitaxel and gemcitabine was initiated and sponsored by a drug company to achieve FDA approval for nab-paclitaxel. The trial design was to achieve FDA approval and not based on a specific scientific rationale. The combination has serious toxicity at the doses utilized in the phase II trial, and will not be a useful platform upon which to test additional drugs. The utility of gemcitabine as a single agent has for years been debated. Adding drugs with marginal activity to gemcitabine has not and will not significantly improve upon that which has been observed over the last decade.
​
All industry sponsored trials have used gemcitabine in the control arm. Why; not to advance science, but to get drugs approved. Is it at this time even ethical to have single agent gemcitabine as the control for ongoing trials when reliable data has supported the significant superiority of FOLFORINOX compared to gemcitabine with significantly higher survival and response rates?

​There is no difference in overall survival between 5Fu/Leucovrin versus gemcitabine following surgery. The median survival is between 23.0 and 23.6 months. This is no different than that which was observed in the original Gastrointestinal Tumor Study Group using 5FU and radiation initially reported in the 1970’s. If either 5FU or gemcitabine have minimal activity in the treatment of advanced disease, why should we expect significant activity in the adjuvant setting? I have much more confidence using combination chemotherapy as the only therapeutic modality in the adjuvant setting. Options would include Abraxane and gemcitabine, FOLFIORINOX (at a modified reduced dose), gemcitabine, 5FU, leucovorin, irinotecan, cisplatin (GFLIP), or 5FU, leucovorin, Mitomycin-C. The RTOG 97-04 study comparing pre and post-chemo radiation 5FU with pre and post-chemo radiation gemcitabine for post-operative adjuvant treatment showed no significant difference between the two arms. The overall survival was not observed to be different than single agent gemcitabine. Why add the toxicity of radiation therapy without achieving a significant benefit?

Combination chemotherapy without radiation is the preferred choice therapy. I would continue combination chemotherapy as long as the following parameters were met:
Regimens that are active and demonstrate efficacy are:
Radiation combined with single agent chemotherapy does not result in overall survival that is any better than that which was achieved in the 60’s, 70’s or 80’s. There is no conclusive evidence that with patients with a poor performance status will objectively benefit in response or survival from single agent gemcitabine.

There is no conclusive evidence that gemcitabine is superior to 5FU as first line therapy for patients with pancreatic cancer. At this time, no single agent can be recommended as standard first line therapy. Combination chemotherapy has been shown to:
When compared to single agent gemcitabine. Combinations that have shown to be both safe and effective include:
It has been recommended that single agent therapy with either gemcitabine or capecitabine is acceptable treatment for patients with stage IV disease who have a poor performance status. There is no data to support this. Stoniolo et al. is an open label single-arm design with more than 2000 patients having metastatic pancreatic cancer who were treated with gemcitabine, reported a median survival of only 4.3 months. Most of those patients had a good performance status. The package insert from Eli Lilly states that the confirmed objective response rate from gemcitabine was 0%. Of 41 consecutive patients I have treated with single agent gemcitabine only one patient was observed to have an objective response.