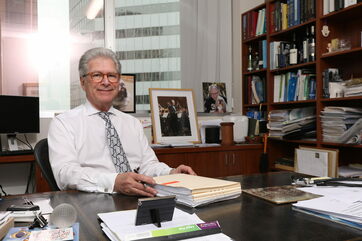 Dr. William H. Isacoff was born in Brooklyn, New York and raised on Long Island. He received his undergraduate degree from Hofstra University, and in 1970 his medical degree from New York Medical College. At the completion of his fellowship training in Hematology and Oncology, Dr. Isacoff accepted a teaching appointment at UCLA-Harbor General Hospital and served as the Associate Chief of Medical Oncology, which he held until 1980. He was a pioneer in the research of the biochemical-pharmacology of methotrexate which resulted in the safe use of high-dose formulations for patients with bone cancer (osteogenic sarcoma). This work led to its safe use in the adjuvant setting which enabled patients to be cured without the necessity of amputation. He advocated the routine monitoring of methotrexate plasma levels in patients with bone cancer who were receiving high-dose formulations of this drug. This was made possible because Dr. Isacoff helped develop the analytical technique for measuring methotrexate in the patient’s plasma. Prior to the availability of monitoring plasma levels of these patients, the drug-related mortality was approaching 20% nationally for patients being treated on NCI approved protocols. Dr. Isacoff was able to identify patients at high risk of developing serious toxicity, and thus intervened with a modified dose and schedule of an antidote (referred to as a rescue) to methotrexate. This reduced the national drug-related mortality to less than 1% and ultimately allowed its safe use in the adjuvant setting which enabled patients with bone cancer to be cured without the need of an amputation.

He also described the biochemical rationale that resulted in the synergistic effects of low dose continuous infusions 5-FU and Mitomycin-C in patients with advanced colon cancer and pancreatic cancer. These treatment regimens were not only more effective, but less toxic. In a multi-institutional cooperative group setting, Dr. Isacoff was the study coordinator of the trial for patients with locally advanced, non-metastatic pancreatic cancer that achieved the longest median survival ever published, when this 5-FU and Mitomycin-C combination was utilized. He was the first to recognize and describe the rationale for the high response rates to Mitomycin-C in patients with pancreatic cancer whose tumors have mutations of the BRACA 2 gene.

Dr. Isacoff continues to focus on the development of newer, more effective and less toxic treatments for patients with pancreatic cancer. By using low dose “metronomic” chemotherapy without radiation, Dr. Isacoff and the Pancreatic Surgical Team at UCLA have down staged more than 60 patients who at the time of initial diagnosis were felt to be inoperable; and who after successful treatment with combination chemotherapy were then able to become surgical candidates. Seventy-five percent of those patients were found to have lymph nodes that were uninvolved with metastatic disease as a result of the prolonged use of effective chemotherapy. The median survival of these node negative patients has not been reached but will be greater than 5 years.

Dr. Isacoff has published extensively and has lectured throughout the United States, Canada and abroad. He was nominated to participate in the prestigious Science Writers Seminar, an annual meeting jointly sponsored by the American Cancer Society and the National Cancer Institute where panels of experts hold press conferences on cutting edge science which ultimately lead to significant advancements in the treatment of cancer. He has received seven peer reviewed research grants. He has consulted for and collaborated with numerous cancer centers including MD Anderson, Memorial Sloan-Kettering, Johns Hopkins, Mayo Clinic, Yale, Columbia-Presbyterian and the Eisenhower Medical Center. From 1975-1981 he was a Senior Consultant to the Rand Corporation in Santa Monica, CA.

Dr. Isacoff currently holds an academic appointment within the Department of Medicine at the David Geffen-UCLA School of Medicine. He serves on the Board of Directors of the Jonsson Comprehensive Cancer Foundation. He serves on the International Board of Governors of the Hebrew University of Jerusalem, and is a lifetime trustee of that university. He has designed clinical trials for and served as a consultant to the Southwest Oncology Group and the American College of Surgeons Oncology Group. In 2005, Dr. Isacoff was the recipient of the Medical Visionary Award from the Pancreatic Cancer Action Network, an award presented to a prominent individual within the scientific community whose outstanding professional achievement and contributions have advanced pancreatic cancer research. He has worked for four decades to form better, safer and more effective treatments for patients battling pancreatic cancer and other gastrointestinal cancers.

When he is not working, Dr. Isacoff plays golf, skis, hikes and travels extensively. Recently he was in Chile in the Atacama Desert, the highest and driest desert in the world were he was hiking. Shortly thereafter he went snorkeling at the Great Barrier Reef in Australia. He collects 19th Century French art from the “Barbizon School” and is a Patron of the Metropolitan Opera in New York which he visits frequently. In 2009 he produced the show “Bring It to You” at the Metropolitan Museum of Art in New York for over 300 inner city high school students. He also chaired and produced the “Legacy of Einstein Science,” an academic conference to celebrate the 100th anniversary of Einstein’s miracle year, the year in which Einstein published five papers that changed the world. http://thesciencenetwork.org/programs/the-legacy-of-einstein-s-science/session-1-2
​
For more than three decades Dr. Isacoff has earned a reputation as one of the foremost gastrointestinal oncologist within the United States and has developed innovative treatments which have significantly extended the lives of pancreatic patients throughout the country.